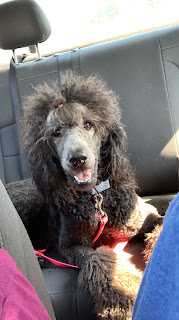 This morning I had a plan.  I was going to take Kona to Hollywood Feed for some social interactions.  Since spending all this time at home with the COVID-19 Shutdown, she has regressed a lot on her social skills.  My intention was to do some filming of her while we were out, however that was quickly abandoned.  At first, she did pretty well, she walked with me and would every now and then forge ahead of me but would come back to heel when I asked.  Not once did she try to take anything off the shelves though.  I was very proud.
As we made a loop around to the front counter she caught sight of this sign spinning in the air and she just lost it.  She never once barked at it but she crouched down and her legs were shaking.
We have definitely had a setback.
After a nap to try and get some relief from a migraine that had started making me feel sick, I went out with the pups and found a huge blood smear on my patio at first I thought Kona had finally come into heat then I walked inside and saw more blood, and a trail of blood that finally led into my kitchen and looked as if some animal had been massacred.

I found a picture frame that had been knocked over and some broken glass and realized what happened.  Yadi's feet were still white so I got Kona to stand still so I could look at hers and sure enough, she had sliced open her foot.  I called my vet and they said to bring her in.

When we got there she was scared until she saw her Auntie Pam and got snuggles from her.  Then we 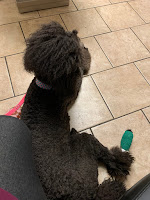 went back to the exam room and at first, she didn't' want to get up on the table when it had been lowered to the floor, but I just dropped a few treats on the table and she slowly stepped up there and got on the table.   She weighted 54.1LBS  As Dr. B raised the table she was very calm and her normal self.
She let Dr B and Megan examine her foot and clean the wound, while she just stood still and watched them.  They took her to the treatment room to be able to put some staples in her foot, I was worried how she would react but Megan said that she was excellent.  I was so proud of her.

We played some leave it games while waiting for Dr B to come back and mainly I was rewarding her for not barking at everything she was hearing behind the closed door.

Once we were back in the car I realized that she is such a good girl and just has a few quirks we need to work out.  We will get there, it will just take us a little time.  I'm following her lead though and letting her tell me when she is ready to move on to the next task.  Right now we have to get this foot healed up.

There are some changes I'm working on and so this blog, the training blog will continue but will be moved over to www.downtoearthdogtra...