Yesterday was a good, but frustrating day for training Riley.  She is so good at some things and so annoying at others, but that’s why we are training.  We started our day out at Starbucks for a coffee and some quiet downtime before my day of training started. 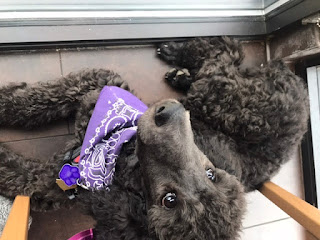 She settled into a spot between my chair and the window and laid down to watch the world go by as I did some light reading and enjoyed my coffee.  She got lots of stairs and smiles and one guy even asked if he could take her picture.  I didn’t mind because at least he asked.  She behaved herself very nicely I was super proud.
One of the things best things I was happy to see was that traffic didn’t phase her in the least.  As we crossed two busy intersections she happily stayed right with me in our heel position, and stopped when I did.
She didn’t care to walk in the rain at all, however every puddle we came to she wanted to drink it dry.  So we had to do a lot of leave it practice with puddles.  I was like I know I’m giving you plenty of water what on earth is going on???  She can drink a whole bowl bone dry in 3 seconds flat.  Which makes our potty training that much harder.  I have to remember that I have only had her for 2 weeks and we are making progress.  I need to teach a target behavior to let me know she has to go potty so that she can tell me when she needs to go out in public.
We went to Lowe’s later and worked with a new Therapy dog student named Sam.  Riley did some barking while Sam’s dad held her for me and I worked with holding on to Sam.  Normally I would have used Riley to show Sam’s dad how to do the behaviors with Sam, however Sam was pulling really bad, and Sam’s dad had stitches in his hand so I did the work with Sam and let his Dad watch.  When he settled down I let dad take him back and I took Riley and had her work on Cover (her laying behind me to prevent someone from walking up into my personal space.).

Later in the day we went to meet with Ashlynn and 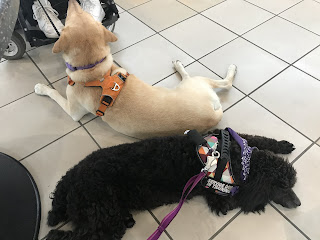 Lilly to work on helping Lilly work on ignoring other dogs.  I’d say we had a wonderfully successful session.  Several people walked by and Lilly ignored them.  A guy walked by with a big cart and said “Hi Lilly” and she just kept her eyes on Ashlynn, I was very proud of her.  She is 5 years old and I’ve been working with her off and on since she was 12 weeks old!

Then we worked on ignoring another dog with the little spit fire Eve, a young German Shepard Puppy.  She was working on learning to settle down and not show her frustration at being not a being able to just do what ever she wanted to do.  When she gets over being a pushy puppy she is going to be such a solid girl.

I ended the night training with Keira teaching her not to pay attention to kids moving around her.  So we were at the mall, and enlisted Ian to help us train.  He was just inside the playground practicing his ninja skills while we played “look at that” from a distance.  Even the mall Security Guards were enjoying watching us work and came by to tell us so. 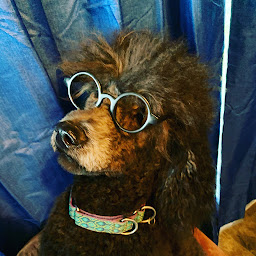