When Your Dog Trains Your Kids 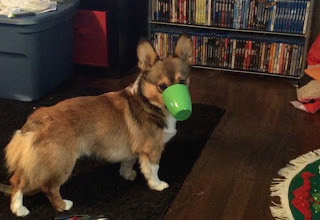 This morning for the umpteenth time I called Yadi over to me to give him a treat in trade for whatever thing he had grabbed off the floor that belonged to one of my sons, it occurred to me that other people probably have the same thing going on in their house as well.

Yadi learned early on that if he grabbed something he wasn't supposed to have, one of the boys would get really excited about it (start yelling) and play chase with him (try to get the item back)  sometimes it was even me trying to get the item back.  Often it resulted in him bringing things to me to show me what treasure he had found in exchange for a treat if he would give it up without a chase. 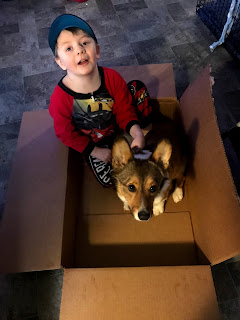 So for him, this became one of the best games ever, and he loved to play it so much he trained my boys how to play it with him.  He would find something that they were repeatedly told not to leave on where he could get it and make sure they saw him with it.  Much like the pose in the picture.

When Connor first moved in with us we left him home alone with Yadi while we went to pick up Ian from daycare and when we got home Connor was yelling at Yadi and scared him.  That afternoon Yadi started to view Connor as a threat and even bit him on the rear end for messing with Ian that night.  He has since displayed heavy herding behavior with Connor. 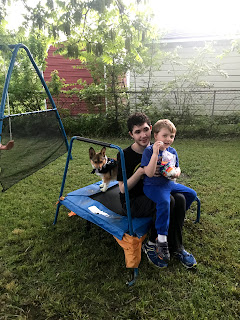 I tried to get Connor to train with Yadi to get him to listen to Connor and start to follow his instructions.  I thought it might help with hearing behavior.  Connor however did not follow my instructions and allowed Yadi to take advantage of the situation and actually trained Connor to just treat him for nipping at his heels.   So now Yadi has Connor trained that if he takes a step and Yadi barks he will give Yadi a treat so that Yadi doesn't nip his ankle.  This is where I don't know if I should laugh, or shake my head, and most days I do both at the same time.

Yadi is ever watchful of my boys and I'm very grateful for that, but he is also a very smart dog.  I heard a saying a long time ago that has stuck with me throughout all my years as a trainer, and Yadi is definitely an embodiment of this saying.   I wish I could remember who said it but...

There are some changes I'm working on and so this blog, the training blog will continue but will be moved over to www.downtoearthdogtra...